Every year I volunteer in the United Way “Day of Caring” in the area where I live. What happens is I “donate” a vacation day and work on a project site. I have planted daffodil bulbs in the park, done yard work at a house for mentally challenged individuals, and cleared brush on a mountain trail. I’m not tooting my own horn here, I get something out of the work too. It gets me outside away from the computer for a day. This year we did work at a mansion that is owned by a local historic society (and open free for tours most days of the week). 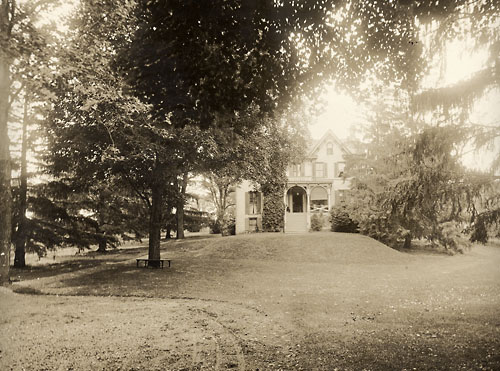 Picture of the Mansion

It was a beautiful day, if unseasonably warm. Honestly, it was nice to be outside. Our task was to clear out some trees at the back of the property to give a better view of the house. Others planted flowers, tidied up the landscape, and painted inside. I think we all slept more soundly than usual.

At the back of the property was a great sycamore tree, which was impossible to look at without a sense of awe. There is a plaque at the base of the tree which states the tree has been in that same spot since the days of the signing of United States Declaration of Independence (1776). Just amazing.

So yeah, I’m a little sore from all the manual labor. However, I drive by this spot every day on my way to work and each time I look at it I’ll know I made it just a little bit nicer. I’ll also think of that sycamore tree, knowing it will probably still be there long after I’m gone.

Remember my book quandary from a few days ago, the one in which I was going to buy either the Terry Pratchett book or the Susanna Clarke book? Well, I did indeed buy a book, but it was neither of these. Instead I bought the paperback version of Neil Gaiman’s short story collection Fragile Things, which just was just released.

When I arrived at the bookstore, I sought out each book I was considering, holding them in my hand for a moment, contemplating which one I would like the most. The Pratchett one was nice, but it was the most expensive. The Susanna Clarke one was nice, but seemed a little thin for $15. The Neil Gaiman one felt just right.

The paperback edition of Fragile Things has some pretty nice “special features.” In the introduction, Neil Gaiman talks a little about each story, about what he was thinking about when writing the story, or how the story came to be. Very interesting stuff. At the end of the book there is even a little interview with him.

One of my favorites that is included in this book is his poem Instructions, which I suggest you all read. My take on the poem is that it’s instructions on how to survive a fairy tale. Here is my favorite part:

However, if any creature tells you that it hungers,

If it tells you that it is dirty,

If it cries to you that it hurts,

Do not lose hope — what you seek will be found.

Trust ghosts. Trust those that you have helped

to help you in their turn.

Trust your heart, and trust your story.

In other booky matters, I was able to track down a copy of the Encyclopedia of Fairies from the library the other day, and this library actually let me take it home. It felt pretty cool to be at the library “researching my novel”. I felt like a real writer for once. The book is as good as I thought, chock full of information about fairies, brownies, and other creatures. I have the book until October 24th, so I’m trying to take as many notes as possible.

One of the things I was worried about in taking this book out of the library was the smell. I really don’t like the mildew smell some library books get. It just really gets to me. I even researched on the web on how to remove the smell from books without harming them. I found this article in which they use kitty litter (unused I suppose) to get rid of the smell. I didn’t have to try this as the book smells fine.