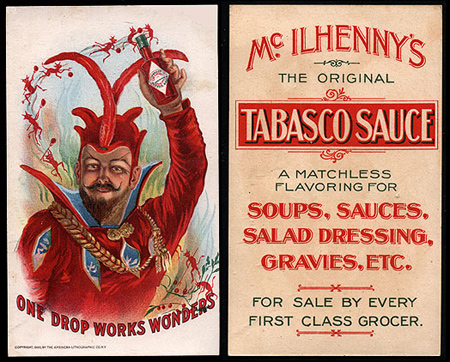 I found this image via Wikimedia Commons. Supposedly it’s from a tabasco sauce advertisement from 1900. Would make an interesting writing prompt, I think, if I had the energy for such a thing.

I made a little progress on Chapter 4 of my novel yesterday. A key for me was to print a few pages out and edit them at work during my lunch hour, away from the computer and the evil Internet. The Internet is too shiny for me to ignore. I lack the willpower. In fact, if the Internet were a person, I’m pretty sure it would look like the guy in the image above, waving his products while little devil guys fall out.

My wife worked last night so I got to watch my daughter on my own. We had a pretty good time. We drew on the sidewalk in chalk (I drew a pretty good Lola, from Charlie and Lola), and my daughter drew a couple scribbles on the fire hydrant saying, “the fireman will be soooo happy”.

The end of the night was a little rough as she missed her “mamma” and wanted nothing to do with me. The only way I could get her to lay down on the couch (she was tired, it was 9:00, and she hadn’t had a nap) was to pop in her They Might Be Giants Here Come The 123’s DVD for her to watch. She was asleep before they got to three.

Not much else is new. We have a lot of work and money to spend in preparation for her birthday party of Saturday. There will be 20+ people in our house and my wife’s family will be sleeping over. Should be a fun party, but until we get there it will be stressful.

How are things with you?