The picture above is a picture of a pumpkin plant I have growing in my back yard (you can also see my daughter’s hand in the right border of the picture — she was helping me). It’s pretty cool why this is growing there. Basically, when last year’s pumpkin was past its prime, I scooped it up and threw it in the back yard. A little less than a year later and I hope to have some pumpkins. I’m pretty excited about it. My parents have been doing this for years, but this is the first time it has worked for me. If you look really closely at the bottom left corner of the picture, you can see the stem from last year’s pumpkin.

I haven’t actually seen any pumpkins on this plant yet, only the flowers. The flowers are actually a pretty orange when they’re fully open. I took this at night, when they were sleeping.

Still, I’m a little concerned that I haven’t seen any little pumpkins yet. So, off I went to the internet. That’s where I learned about male and female pumpkin flowers (my dad never taught me about those 🙂 ) and how you need to attract bees to pollinate the female flowers in order to make pumpkins. Some even mentioned doing the pollination via a Q-Tip. I’m going for the lazy method of closing my eyes, crossing my fingers, and saying a little prayer. Here’s a post I found on the web, talking about the process. There are pictures there as well, which would be borderline pornographic if you are a pumpkin 🙂

Anyhow, I’ll let you all know if we get any pumpkins.

Just for the kick of it, here’s a picture of a tree growing in our back yard also. I have no idea what type of tree it is. 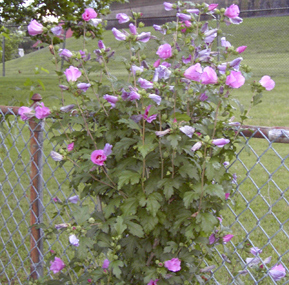