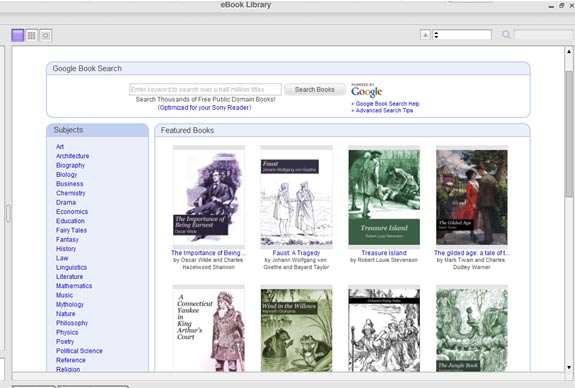 Did any of you hear yesterday that Sony and Google announced a deal that brings 500,000+ books for free to Sony Reader users in Reader format? Here’s a quote from the press release:

Sony and Google announced today the launch of a partnership to bring upwards of 500,000 public domain texts from Google’s Book Search collections to Sony’s line of electronic Readers at no cost to the user.

What does this mean? It means Paul has got some readin’ to do!

These books were previously available from Google anyhow and it was possible with some software and some time to make files you could read on the Sony Reader. This just makes it much more accessible and easy. All I have to do is go to my Sony Reader software, find the book I want, and click “Download”.

There is some great stuff there. Edgar Allen Poe, Charles Dickens, L. Frank Baum (all of the Wizard of Oz stuff is there), as well as non-fiction books. Here’s a link to a book I downloaded yesterday titled The Life of Abraham Lincoln (written by Henry Ketcham in 1901). Note you don’t have to have the Sony Reader to read this online.

This is such excellent news for me as a book lover and a Sony Reader owner. Anyhow, just thought I’d share.