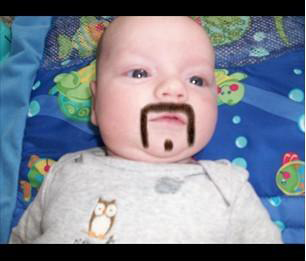 Well, it’s playoff hockey time, and you know that that means? Playoff beards! As you may recall, last year I grew a bit of a playoff beard in honor of my Pittsburgh Penguins and they nearly won the Stanley Cup. If you’re curious, use the search thingy on the blog up there.

I’m not sure if I’ll be growing a beard this year. For one, the wife and daughter were not big fans of the beard. Secondly, that thing got itchy! At least one member of my family decided to get in on the act, though. That’s my son in the picture above sporting a very stylish beard.

That’s actually from a website called Beard-a-thon. You can create your own beard pictures there. You can also sign up to raise money for charity by growing a beard or sponsor somebody who is growing a beard. Check it out.